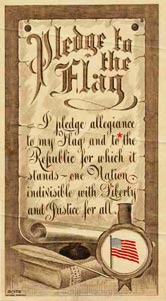 Pop quiz! What historical event is associated with the origin of the Pledge of Allegiance?

Answer after the break.

For bonus points, when did we start to print “In God We Trust” on our currency?

The Pledge of Alliance was written in 1892 by a Christain Socialist, Francis Bellamy. (He was the cousin of Socialist Utopian novelist Edward Bellamy.) The pledge was associated with the opening of the Chicago exposition, more than a century after the founding of the nation.

Shown: The original Pledge, from the Pacific Grove Museum of Natural History.