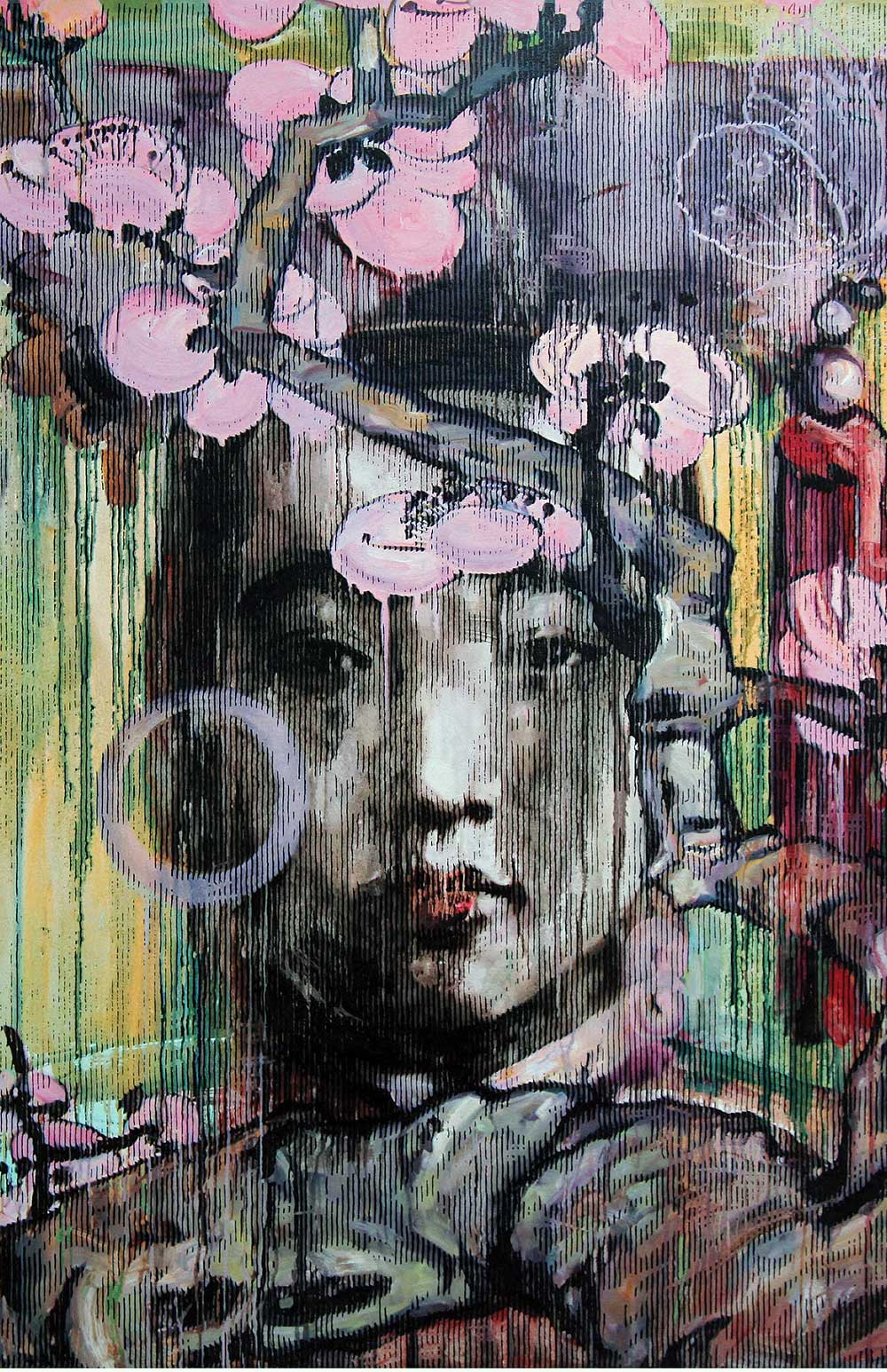 Subtle, sweet, subversive, and sly, The Lost Poems of Cangjie will leave many readers puzzled – and, equally, delighted. The core of the book consists of two series of lyrical, imagistic poems, both apparently made up of fragmented ancient Chinese verses somewhat in the style of the classic Book of Songs. Individual poems mostly are short, both in line length and in number of lines, and most explore themes of longing and forbidden love.

I’m not kidding when I say ancient. The two poem sequences, as explained in a sort of Borgesian prose frame that describes their origin and discovery, were preserved in scrolls concealed within one of the terra-cotta warriors of the First Emperor’s underground army. One, the “Beta Scroll,” was written near the time of their concealment, which is to say, around 210 BCE, when the Qin dynasty collapsed and was replaced with the Han. (That places these verses roughly contemporaneous with the poems of  Apollonius of Rhodes, author of the Argonautica, and a good century and a half before Vergil.)

But that’s nothing compared to the longer “Alpha Scroll,” which is attributed to Cangjie, the legendary founder of Chinese writing. He is supposed to have lived two and a half millennia earlier still, during the reign of the primogenitor of Chinese culture, the Yellow Emperor. In other words, he is more distant in the past from the author of the Beta Scroll than we are in the present. If these poems are indeed the work of Cangjie, that would make them the oldest extant poems in the world by a considerable margin.

Despite the vast time separation, the two scrolls are similar both stylistically and thematically. This may be attributable in part to the transcription (or translation) of the Cangjie poems by the later Chinese poet, known as “the Sculptor” because of his work as one of the creators of the First Emperor’s underground army. In addition, both poem series are translated into English by a mysterious figure known only as “E. O.” The translator also provides an afterword.

But the book begins with a foreword by John Briscoe, who identifies himself as “a lawyer whose practice takes me to East Asia.” There, we are told, he met E.O., who asked him “to act as agent to bring this work to publication.” (Briscoe in turn asked me to assist in producing the publication — under the imprint of Risk Press, directed by Charlie Pendergast — and I will talk a bit about the book’s design in a subsequent post.) 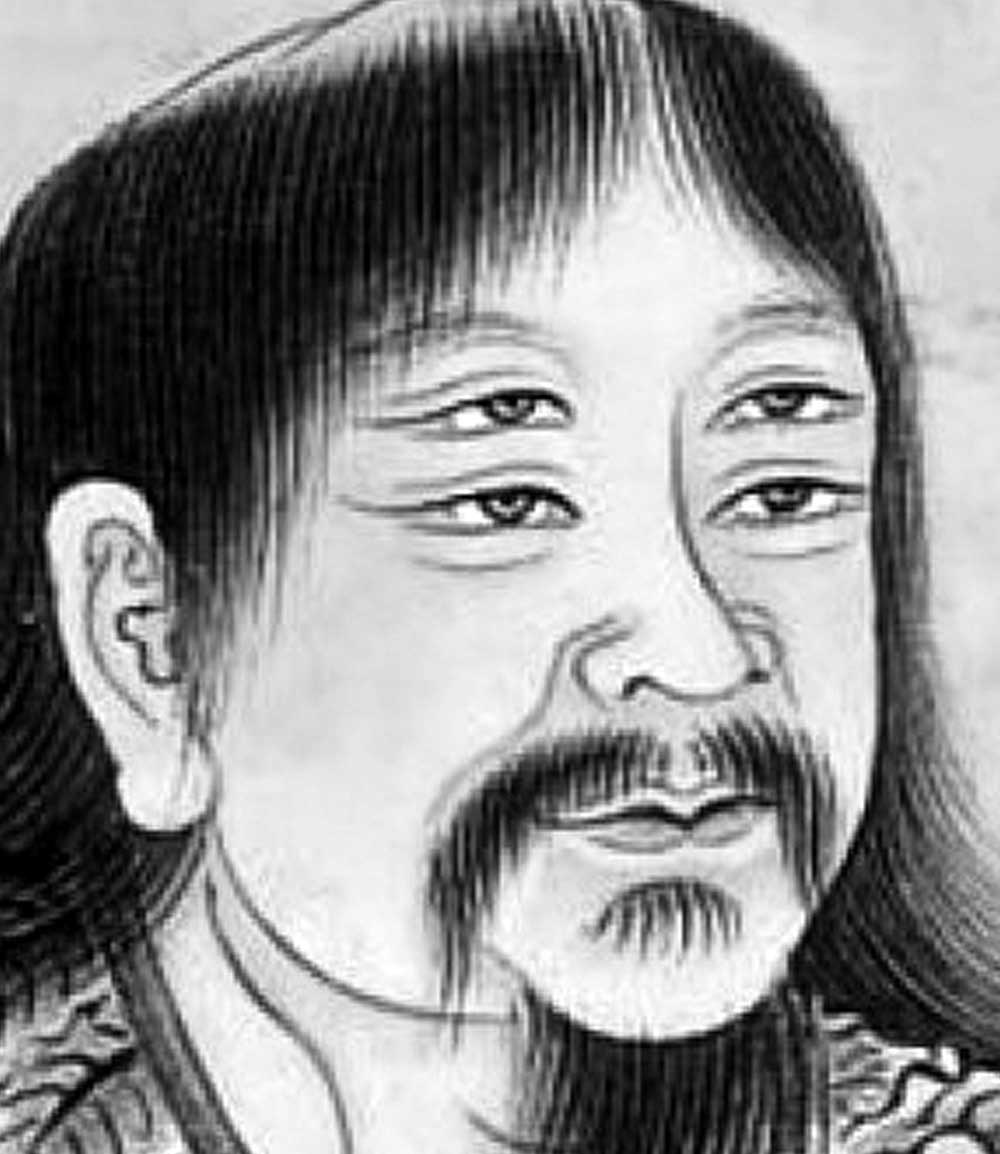 Seventeenth-century portrait of Cangjie (detail) by an unknown artist.

Briscoe touches on the story of the poems’ creation and their journey into English, but this is explained most fully in the translator’s afterword. E. O.’s prose style is more florid than Briscoe’s (though this is not particularly evident in the poems). This is how he begins:

When words first pealed the ecstasy of sunrise, cried the ache of moonrise, sounded the desolation of this life, we don’t know. We don’t know when sounds first stood as words for we, for home. We don’t know whether a word for home existed before a word for returning home, or for the unutterable ache to return home. We do know, though, that like many words, like whole languages, those clusters of words we call poetry arc like meteors. They blaze brief, if at all. If it is particularly right, for its time, or all time, and if the people who spoke it are not all dead or, if written down, and the libraries holding it have not been put to the torch, then a poetry might persist longer, more like a comet than a meteor, a comet plying the night sky that in the end fades into the cosmos. A poetry that survives centuries, however, much less millennia, stands in the firmament like a constellation, wandering at seasons beyond the horizon, but in time returning to the night sky.

E. O.’s telling of the discovery of the scrolls is cloaked in circumspection for political reasons. “Vagueness,” he tells us, “is the better part of discretion, which is better here than any valor.” A young archaeologist, E. O. explains, chanced upon the scrolls within the torso of a terra-cotta soldier as he was working on the excavation of the underground army. To the First Emperor is traditionally attributed a great Burning of the Books, and these scrolls were apparently hidden to avoid that fate. Worried that the scrolls might even today be suppressed or destroyed for political reasons — because they are critical of political rulers and might be seen as seditious — the archaeologist concealed his discovery and removed the scrolls. Eventually the poems were translated by E. O. into English.

I mentioned that the scrolls share certain themes. The archaeologist’s concern about the possibility of their being viewed as seditious results from a shared animus toward emperors and their high-handed governance. Each poet served a strong emperor: Cangjie the Yellow Emperor and the Sculptor the First Emperor (although the Yellow Emperor preceded him by millennia, Qin Shihuang is known as the First Emperor because he unified China only a couple of centuries before the beginning of the common era). In the words of E. O.,

A number of the verses of Cangjie speak (not at all with affection) of an emperor, the Yellow Emperor. Verses of the sculptor, the transcriber of Cangjie’s poems, also speak occasionally of an emperor, the First Emperor. At times Cangjie’s emperor seems a conjured emperor, at times not. The loathed emperor of the sculptor, though, is not a conjured emperor, no mere metaphor for life’s oppressions and petty oppressors. He is, plainly, the historical figure the First Emperor, the Burner of the Books.

For example, the Sculptor writes the First Emperor

First Emperor is only
an emperor, only
another emperor.
But this emperor burns our books.
Burners of books
in the end burn people.

while Cangjie writes of the Yellow Empeor

Emperor practices jealousy
as if it were an art
like falconry, or archery.
He more than lusts,
he is more than jealous,
he is envious of the beauty
sleeping languid in your skin
and not in his.
He seethes when he sees you before him.
Does he take you thinking
you will ravish him
and he will be reborn as you?

The object of the Yellow Empeor’s lust was one of his concubines, who perhaps resembled the woman depicted in the cover art by contemporary artist Hung Liu.  Cangjie loved this woman, who of course was unattainable to him, and, we are told, invented writing to communicate his love to her. As the Sculptor explains:

The prints of feet of song birds
were pictures of words
for moonset, and breast
and yes.

An egret leapt into flight
leaving in sand the etched word
love.

Cangjie perhaps alludes to teaching his love to read his poems in the first fragment of his series (part of which was indecipherable to the translator):

Mostly his poems express his love and longing. The poems are imagistic, economical, heartfelt, and lovely. The fascinating prose frame that surrounds them (and sometimes manifests in footnotes to the poems themselves), should not cause us to overlook the poetic quality of the verses themselves. These verses, for example, are typical of Canjie:

Like your lashes
your hands flutter?—
quails in a bush
at an approach?—
mine
this time.

The court lights — has a sun pierced
clouds outside?
No, it is you entering,
smiling. You have, I think,
drunk more than a cup of wine.

A band of players pipes
a tune, an air?—
no, it is you
laughing
somewhere in the open court.
I will have another cup
brought to you.

Is it all an elaborate put-on? Perhaps, but the sentiments are real and the verses are moving, informed by poetical tradition and crafted with an awareness of poetic technique. Borges would have loved the deadpan literate frame, and Cervantes — whose Quixote is attributed to a Moorish author, Cide Hamete Benengeli — would have appreciated the possibly deflected authorial attribution. And even more the empathatic impulse to acknowledge universal human feelings across vast cultural boundaries. The Lost Poems of Canjie is one of the most original and fulfilling books I have read in a long time. Highly recommended.

I returned home yesterday to find a case of books waiting for me.

This is my translation of poems by José Ángel Valente, considered by many the most significant Spanish poet of the second half of the twentieth century. (Thanks to Eliot Weinberger for the generous blurb.)

The book was published by Archipelago Press, in a lovely edition with a laid-textured cover. Its elegantly simple design is by Dave Bullen (whose mastery of typography is evident in the treatment of the title on the cover). 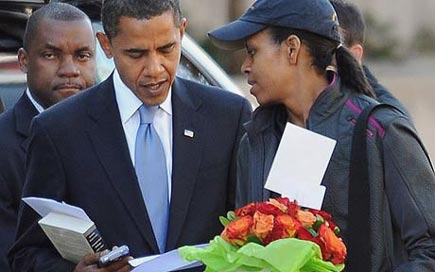 Above is a picture of our President Elect clutching a book of Derek Walcott’s Collected Poems. Nice to see a president at least in the company of literature. I’m happy we elected a person who as candidate championed the power of words.

The book looks unopened and was probably a gift, but no doubt Mr. Obama will dive into the text shortly. Here’s an example of what he might find.

Love After Love
by Derek Walcott

The time will come
when, with elation
you will greet yourself arriving
at your own door, in your own mirror
and each will smile at the other’s welcome,

all your life, whom you ignored
for another, who knows you by heart.
Take down the love letters from the bookshelf,

the photographs, the desperate notes,
peel your own image from the mirror.
Sit. Feast on your life.

At the Guardian, John Hartley Williams posed a poetry challenge. Essentially, the assignment was to fracture a proverb and combine it in a poem with at least seven of the following words: beat, mother, fashion, ghost, pool, dance, disturb, knife, croak, shimmer.

The contest caught my fancy, and I gave it a try. I might have missed the deadline, though, unless they cut me some slack for being on the West Coast. Anyway, here’s what I came up with.

Light danced round the chicken bus
Wobbling from the village of
San Juan Sacatapequez —
It shimmered from the knife of
The crone who had fashioned a
Blanket around her chest. I
Thought her a nursing mother
Until the blood pooled across
The dirty fabric that had
Clasped the pig to her body.
The beast’s eyes caught mine, disturbed,
It seemed, to be exposed at
Such an intimate moment.
El que quiere baile, the
Woman murmured, que pagueMusico. To dance to the
Beat of this world, sometimes
You have to slay the piper.

In the second line I don’t much like the word wobbling. Can anyone suggest something better (needs to be two syllables)?

(I don’t like “shimmered” either, but it’s one of the assigned words.)