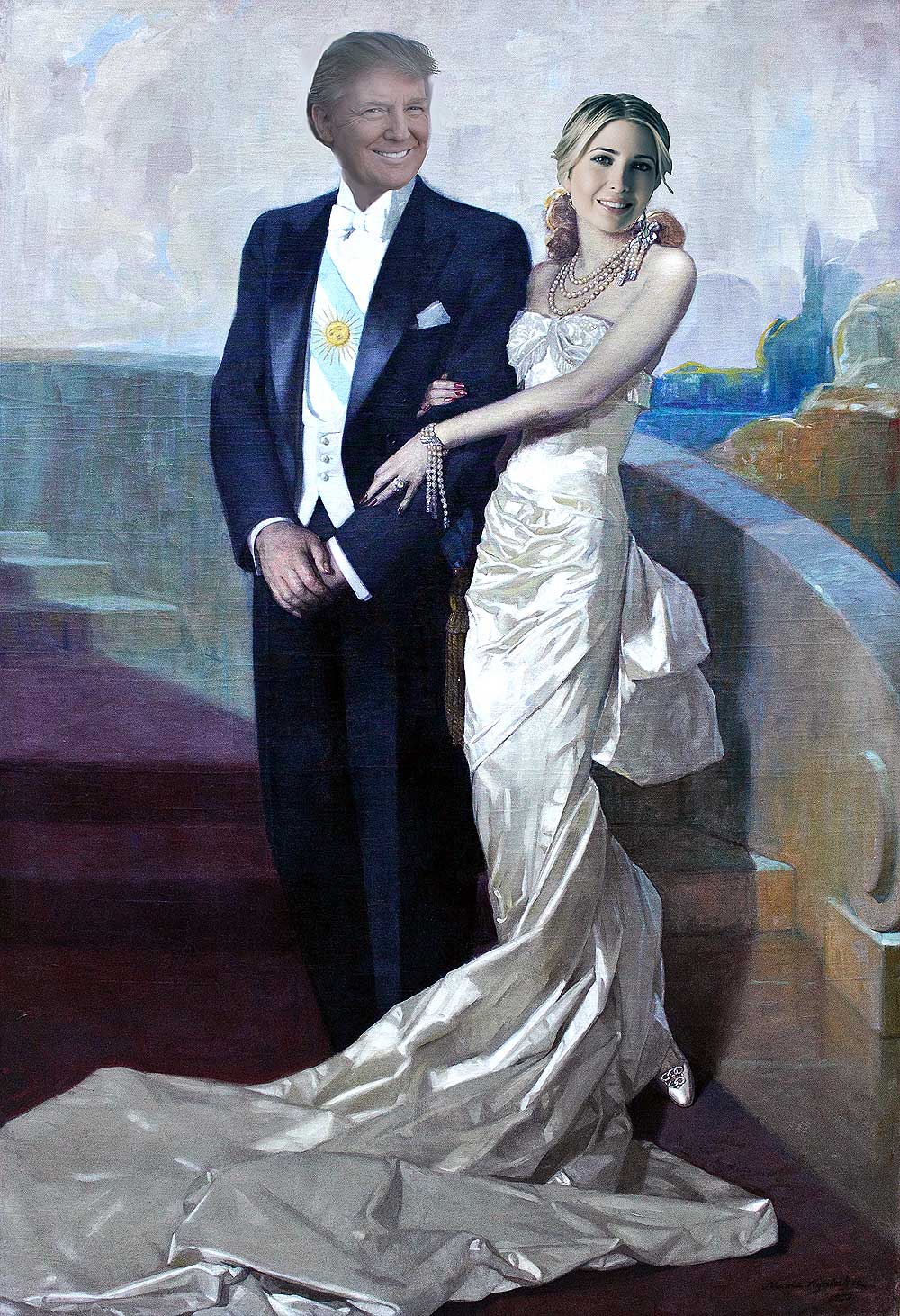 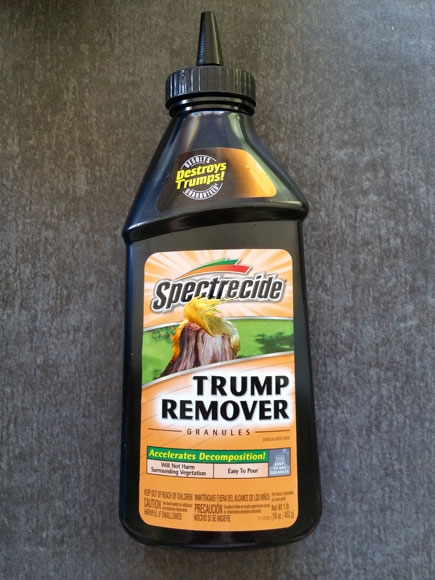 Right Reading does not normally do product recommendations. But recently we ordered this product, and so far we are encouraged by the results. You just drill down. The label does advise that “the decomposition, depending on the density of the trump, make take several weeks or months.”

Reading up on health care

At the Christian Science Monitor Marjorie Kehe offers a few suggestions for reading up on health care. Her list of five and a half books includes the following:

I have read none of these. Are they really the best?

A tip for authors 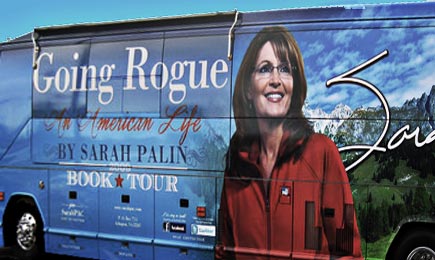 News that Sarah Palin’s political action committee has bought more than $63,000 worth of Going Rogue shows that the ex-governor knows how to manage her books. Going Rogue retails for $28.99. If the books were bought at full retail price and author got a 15 percent royalty off the retail price, that means that 15 percent of the $63,000, or $9,450, ended up in Palin’s own pocket.

The books were used by the PAC to mail copies to potential donors, so that more money could be raised, presumably to purchase more books, which could be then sent to more donors . . . and so on. All the while increasing the book’s sales rank in the marketplace.

Every author should have a PAC! 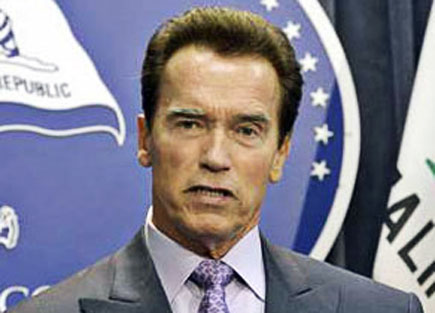 I am reading and enjoying Alexander McCall Smith’s No. 1 Ladies’ Detective Agency. It is my misfortune, I realize, to be so sensitized to colonialist attitudes as to imagine I detect in the book a faint taint of colonialist condescension.

But I am not here today to rant about colonialism but rather to share the following amusing passage from the book. The detective, Mma Ramotswe, muses about her feelings about hospitals and doctors. After reflecting that she is not ashamed of her weight or her corns she continues:

Now constipation was quite a different matter. It would be dreadful for the whole world to know about troubles of that nature. She felt terribly sorry for people who suffered from constipation, and she knew that there were many who did. There were probably enough of them to form a political party — with a chance of government perhaps — but what would such a party do if it was in power? Nothing, she imagined. It would try to pass legislation, but would fail.

Here in California the Constipation Party — with its two warring wings — is already in power. Will it also dominate our national politics, currently focused on the struggle to pass health insurance legislation?

Image from the blog of the LA Times

END_OF_DOCUMENT_TOKEN_TO_BE_REPLACED 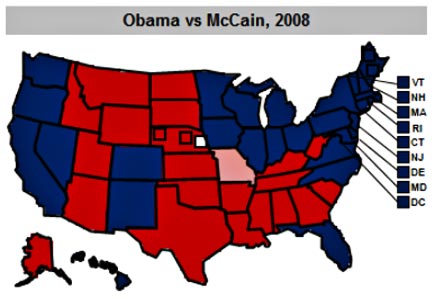 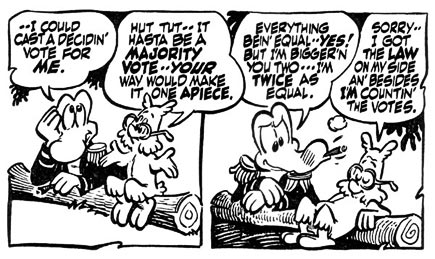 Someone gave me a Pogo book recently. Among memorable campaigns, the possum’s ranks high. Howland’s comment above reminds us that it’s a good thing for Obama that Democrats now control the secretary of state position in several swing states. 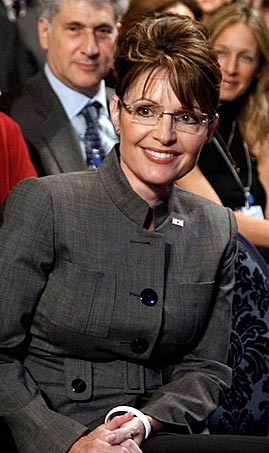 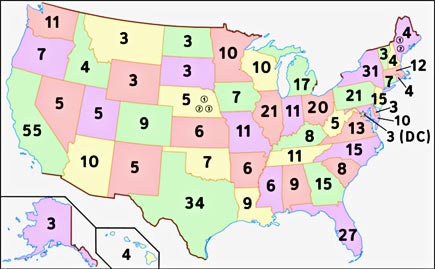 END_OF_DOCUMENT_TOKEN_TO_BE_REPLACED

M. Right Reading has been very busy and productive lately. Just not so much on the blog. Fear not, he will soon revert to his sedentary tendencies. Meanwhile, though largely stearing clear of politics on this blog, he leaves you with this quotation from the NYT:

Although The Washington Post quoted advisers to Mr. McCain on Sunday as saying Ms. Palin had been subjected to an F.B.I. background check, an F.B.I. official said Monday the bureau did not vet potential candidates and had not known of her selection until it was made public.

Sounds like someone is not being truthful. Draw your own conclusions.

Language is a virus

In art and illustration, language, politics

From a series by Tom Tomorrow. 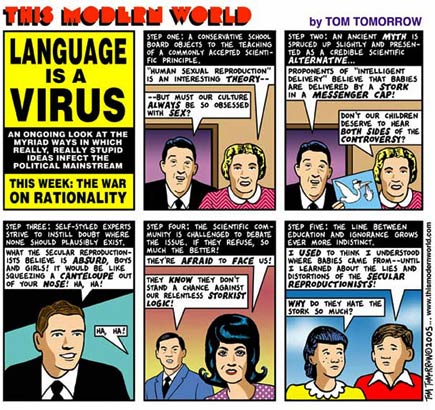 My sites are closed today for Labor Day (and besides, all except Frisco Vista are moving to a new server. Nothing should change for visitors, but it means I can’t update the sites very well for a few hours). Meanwhile, here’s a Labor Day message from Can’t Keep Quiet. 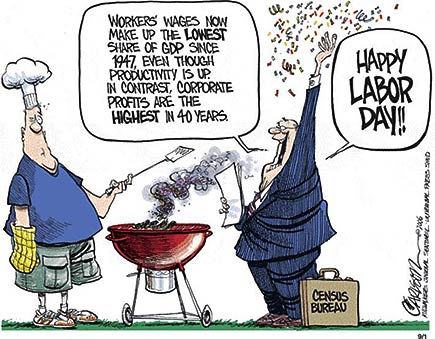 I’ve been thinking about how our system of appointing Supreme Court justices is flawed. Life expectancy is increasing and presidents are appointing younger justices now, who might serve thirty or forty years. If several positions open up during the same term, a single president has the ability to determine the course of the court for a generation.

As we know from our history, many U.S. presidents are dimwits who should not be entrusted with this kind of legacy. This would spread the appointment of justices over more presidential terms, balancing things out a bit. It would not favor any particular position, such as liberal or conservative, but it would moderate the present randomness of the appointment process.

Someone help me get this enacted, okay?

The new ability created by Wikipedia Scanner to track Wikipedia edits by IP address has brought some folks hours of entertainment. Where have the collaborative encyclopedia’s edits been coming from?

No doubt more revelations will be forthcoming.

You didn’t think you had any privacy online, did you?

(The wikipedia scanner link, at this writing, is down .)

A New Test for Lying 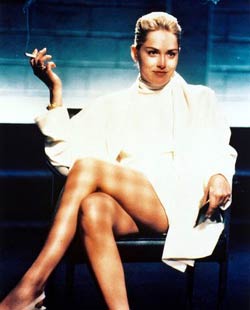 TimesOnline reports that liars have trouble telling their stories in reverse order. It’s a good way to trip up falsehoods. Let’s try it out …

“We’re fighting Al Qaeda in Iraq, and, let’s see, we went in, the United Nations … no that was, um, there were weapons of mass destruction, no wait, that was, let’s see, er ..” 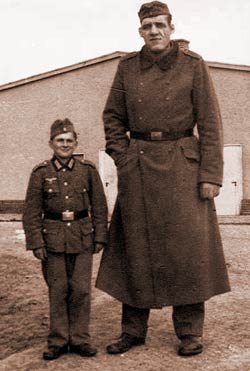 According to the lawyer of the alleged “D.C. Madam,” Vice President Cheney “isn’t not” on her list of phone records.