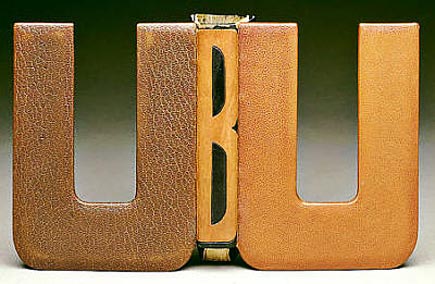 Mary Reynolds (1891-1950) was an innovative book binder who for three decades enjoyed a relationship with Marcel Duchamp described by friends as “happier than most marriages.” Susan Glover Godlewski has written about her life and career, and examples of her work can be seen at the Mary Reynolds Collection (affiliated with the Art Institute of Chicago).

A post at Ordinary finds called this extraordinary binding for Alfred Jarry’s Ubu Roi (Ubu the King) to my attention. It quotes the Reynolds Collection:

This binding is perhaps the best known and most successful of the collaborations between Reynolds and Duchamp. On November 26, 1934, Duchamp visited his close friend Henri-Pierre Roché in Arago and excitedly reported on a binding that he had just designed for Alfred Jarry’s Ubu Roi that Mary Reynolds was going to execute. Reynolds and Duchamp created out of the binding itself an extraordinarily clever pun. Both the front and back covers are cut-out “U’s” covered in rich earth tones; the spine is a soft caramel B. The endpapers are made of black moiré silk. A gold crown, signifying the puppet king, is imprinted on the front flyleaf and visible through the front cut-out “U”. The author’s name is imprinted in gold on the back flyleaf and is similarly visible through the back U. The binding spread open spells “UBU.” Reynolds must have spent considerable time executing this binding. We know from a letter from Duchamp, responding to a question from Katharine Kuh, that the binding was not completed until 1935. It is expertly and lovingly crafted. Both Duchamp and Reynolds were so pleased with the final work, that another copy was bound identically for the American collectors Walter and Louise Arensberg (Philadelphia Museum of Art). 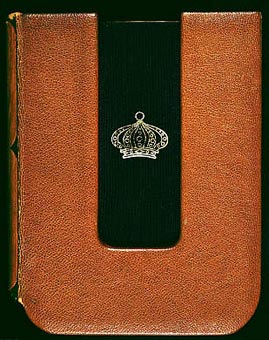