Five centuries of board games 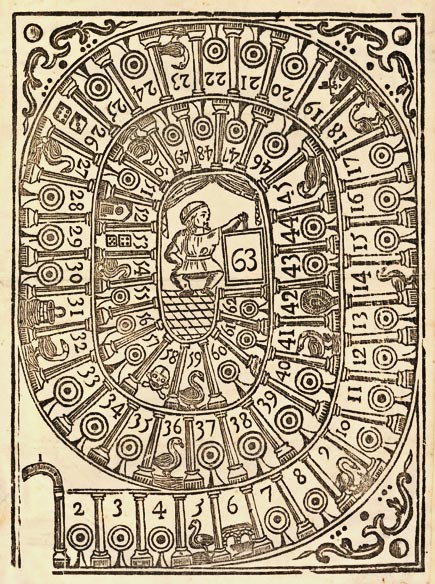 The board was used to play the Game of the Goose, which was the prototype for later racing board games. The game is said to have originated in Italy in the 16th century. You can see on this example several squares containing an illustration of a goose — these entitled the player to advance his or her piece by the amount of the roll of the die (in other words, to double the roll). On square 58 is a skull, which represents death — landing here caused the player to return to start.

In An Eccentric’s Will (Le Testament d’un excentrique, 1899), Jules Verne uses the United States of America as a giant Game of the Goose board, on which seven players race to win a $60,000,000 inheritance.

This is a beautiful, very playable board with great clarity and charm. Please visit BibliOdyssey to see a large and varied range of exceptional Western board games in many styles.