In 1616, art and illustration, history 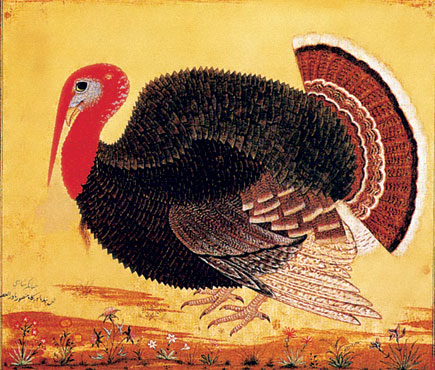 In honor of Thanksgiving, here’s a painting of an American turkeycock by the great Mughal painter Mansur (from my forthcoming book 1616: The World in Motion). Mansur was the greatest Mughal painter of natural history subjects.

It was an area in which the Mughal emperor, Jahangir, was deeply interested. A world in motion brought to his court many strange and curious creatures, which he invariably directed his painters to document. In 1612, when a large number of birds and animals were brought to his court from Goa, he wrote, “As these animals appeared to me to be very strange, I … ordered that painters should draw them in the Jahangirnama [his reign journal], so that the amazement that arose from hearing of them might be increased.”

Among the birds brought from Goa was this American turkey painted by Mansur. Like Abul Hasan (who painted the cover image of my book), Mansur ranked high in Jahangir’s esteem, and the ruler gave him the title of Nadir-ul-asr, “Unique of the Age.” “In the art of drawing,” he said, Mansur “is unique in his generation.” He ranked him together with Abul Hasan, saying, “In the time of my father’s reign and my own, these two had no third.”

Jahangir was proud of such creatures in his menagerie as flying mice, tailless monkeys, zebras, yaks, cheetahs, West Asian goats, Himalayan pheasants, dodos, ducks, and partridges. He had many of the foreign animals bred in captivity. When he received a strange animal he typically would record a verbal description of it before having its likeness painted. In 1616 he was presented with an Abyssinian elephant, noting that “Its ears are larger than the elephants of this place, and its trunk and tail are longer.” His concern for accuracy and completeness of documentation led to a naturalistic approach to paintings of natural history, of which Mansur was the foremost proponent.

I received this e-mail today (some names redacted):

On this date (the Saturday after Thanksgiving) back in 2010 C and I had recently returned from Europe. We had Thanksgiving with E, but C2 didn’t call or respond to calls, and we were worried about her. I had a nasty cold. C had first felt sick on the train from Innsbruck to Zurich.

I was working on the Kepler section of 1616. How’s that book looking?

I had forgot about futureme.org, which lets you send messages to yourself in the future. How strange to get this message from myself from almost a year ago.