Right Reading is taking some time off. If circumstances allow I may make the occasional post, but posting will be, at best, light for the next couple of weeks. After that: recharged!

Sites we like: The Art of American Book Covers 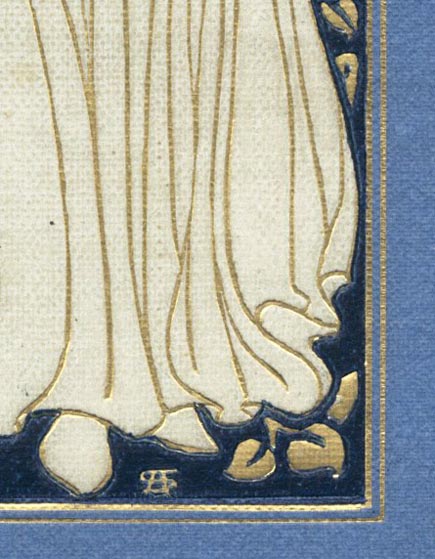 END_OF_DOCUMENT_TOKEN_TO_BE_REPLACED

Book titles then and now

A lot of people have weighed in with examples of book titles then and now over at kottke.org. These are some of my favorites:

Then: Book of Genesis
Now: FLOOD! A true story of heartbreak, heroism, and the will to survive

Then: Moby Dick
Now: Orca Obsession: How the Whaling Industry Is Destroying Our Sea and Sailors

Then: Romeo and Juliet
Now: The Teen Sex and Suicide Epidemic: What You Need to Know to Protect Yourself and Your Family

Then: The Gospel of Matthew
Now: 40 Days and a Mule: How One Man Quit His Job and Became the Boss

And my own contribution:

Then: Julia Child’s Mastering the Art of French Cooking
Now: Chicken Soup for the Kitchen

Green Apple Books — located right here in the Bay Area — has launched a ten-round battle between the book and the kindle. Who do you suppose wins round one? 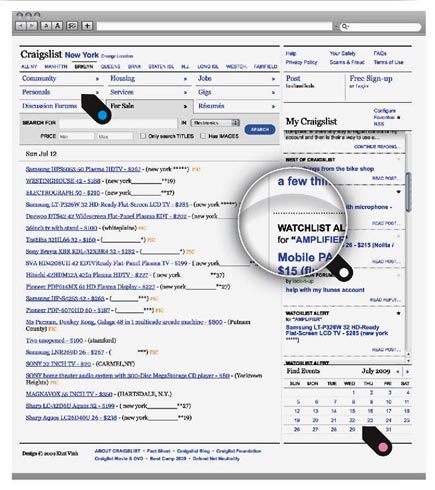 Recently Wired magazine asked a group of designerz to reenvision Craigslist. According to Wired, “Visitors arriving at craigslist are confronted by a confusing homepage cluttered with links most people will never click on. Overall, the user interface is in dire need of an organizing principle that guides you to the details you seek while filtering out extraneous information.”

END_OF_DOCUMENT_TOKEN_TO_BE_REPLACED

“Think for a moment of the long chain of iron or gold, of thorns or flowers, that would never have bound you, but for the formation of the first link on one memorable day.” — Charles Dickens

“Weblogs are a ‘revolution.’ They’re ‘journalism.’ They’re ‘art.’ They’re, again and again, the next New Thing. To which the only possible response can be: come on, people. . . . How can you not boggle at the level of self-delusion, of self-infatuation, it takes to declare that . . . the concept will be alive and well a decade from now? That weblog readership will increase a hundredfold in that time?”

—Greg Knauss, November 1999, in Say Everything: How Blogging Began, What It’s Becoming, and Why It Matters (via Island Bookworm)

I touch your mouth, I touch the edge of your mouth with my finger, I am drawing it as if it were something my hand was sketching, as if for the first time your mouth opened a little, and all I have to do is close my eyes to erase it and start all over again, every time I can make the mouth I want appear, the mouth which my hand chooses and sketches on your face, and which by some chance that I do not seek to understand coincides exactly with your mouth which smiles beneath the one my hand is sketching on you….

This is Julio Cortazar, enormisimo supercronopio, reading chapter 7 of his novel Rayuela.

A friend and colleague, Will Powers, died suddenly of a heart attack on August 25. I had worked with Will when I was at North Point Press, employing him as a free-lance copy editor and proofreader. He had worked previously as a typographer at Stinehour Press, and he brought a craftsman’s eye to the projects he worked on. About twenty years ago, Will moved to the twin cities, and for the past eleven years he worked as design and production manager for the Minnesota Historical Society Press.

Above, where I mentioned his work as a proofreader, I initially typed “proofreading” instead, and I was sorely tempted to retain that error, for reasons that will become apparent. Sometime in the past year or two Will e-mailed me the following poem, entitled “The Printer’s Error,” by Aaron Fogel. It seems a fitting memorial, and I hope the author will not mind me running it here in Will’s memory.

END_OF_DOCUMENT_TOKEN_TO_BE_REPLACED

Well, true, it doesn’t look as good, so why are they making the change?