Can we agree the whole branding thing has got out of hand? I wish that branding had never left the cattle corral. These days, instead of selling an actual product you sell the idea of the product. So you spend all your time working not on the product but on the idea of it.

END_OF_DOCUMENT_TOKEN_TO_BE_REPLACED 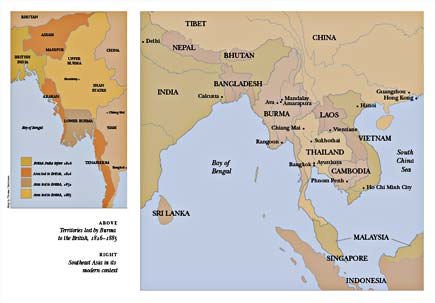 This is a little map I did for Emerald Cities: Arts of Siam and Burma, 1775-1950, a catalogue of a forthcoming exhibition at the Asian Art Museum. The museum’s website says:

END_OF_DOCUMENT_TOKEN_TO_BE_REPLACED 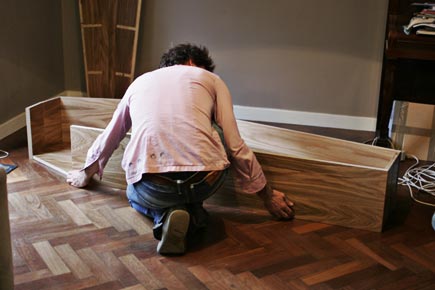 Who says you can’t take it with you? Well, you might have to leave your books behind, but at least you no longer need to be separated from your bookshelves, thanks to William Warren’s “Shelves For Life.”

END_OF_DOCUMENT_TOKEN_TO_BE_REPLACED

Having dunked my trusty Canon A620 in the waters of Pomonkey Creek, I was reduced to shooting this ghost type in Alexandria, Verginia, with my cell phone. 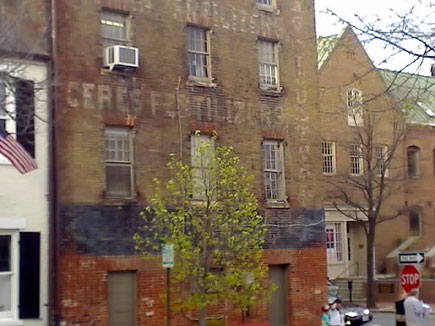 Many authors, among them C. Dale Young, report that Amazon is censoring books with sexual, and especially GLBT, content by removing them from their rankings, apparently in an effort to make the titles less visible to the general public.

Edward Campion, saying the Amazon policy “represents the greatest insult to consumers and the most severe commercial threat to free expression that we’re likely to see in some time,” is among those calling for a boycott of the company.

To add insult to injury, such anti-Semitic texts as Adolf Hitler’s Mein Kampf and The Protocols of the Elders of Zion remain within the ranking system while the less offensive books named above [D.H. Lawrence’s Lady Chatterley’s Lover, Dorothy Allison’s Bastard Out of Carolina, Annie Proulx’s Brokeback Mountain, and John Cleland’s Fanny Hill] are considered too “adult.” In other words, if you’re a writer who has written openly about sex, Amazon considers you worse than an anti-Semitic writer who helped initiate pogroms and concentration camps.

Amazon’s side of the story? Publisher Mark Probst received this communication from Amazon:

In consideration of our entire customer base, we exclude “adult” material from appearing in some searches and best seller lists. Since these lists are generated using sales ranks, adult materials must also be excluded from that feature.

Hence, if you have further questions, kindly write back to us.

I have removed the Amazon link from my right sidebar. The Powell’s link remains, and I encourage readers to buy from their local independent bookstore, or else to order from Powell’s.

I’m on the road and having trouble with my internet connection. So this will be brief.

I’ve mentioned I’ve been helping to judge a translation award. Now that a set of finalists has been announced (although the Chronicle, true to form, omitted the translation category from their story; I’ll list the finalists later) I can say that the book I especially liked among the eligible titles was The Old Man’s Verses byIvan Divis, translated from the Czeck by Deborah Garfinkle.

END_OF_DOCUMENT_TOKEN_TO_BE_REPLACED

Oddest book title of the year

The 2009-2014 World Outlook for 60-Milligram Containers of Fromage Frais has won The Bookseller’s Diagram Prize for Oddest Title of the Year for 2008. News:Lite has the details:

END_OF_DOCUMENT_TOKEN_TO_BE_REPLACED 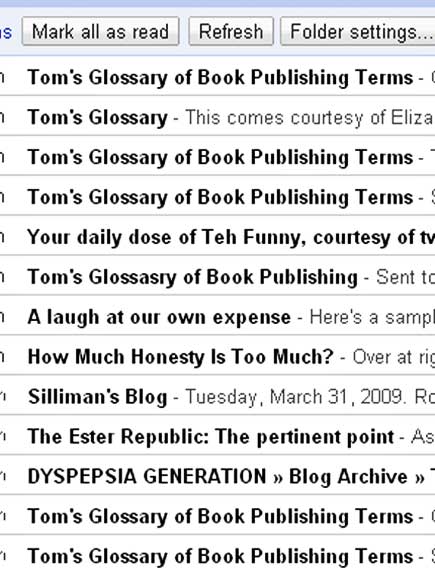 The image at right is a selection from my inlinks tag in Google Reader. It shows websites that have been linking to mine (these are all via Google Blog Search). This is less than a single day’s sample. As you can see, all of a sudden many people are posting links on their blogs to my glossary of book publishing terms.

I’m sure the number of links is not staggering compared to pages that go viral on places like Digg. Still, the glossary has gotten about 5,000 views over the past five days.