But this 80 percent of sales comes from less than 5 percent of the total number of book titles published. In fact, if you go deeper into the statistics, you discover that only a thousand titles, or a bit more, are selling better than 50,000 copies, and the remainder — well over 90 percent of the total number of titles published — are averaging fewer than a thousand copies total sales each. In a previous post I reported that the Booker Prize finalists (leaving aside the overrated Ian McEwan) were likely averaging fewer than 800 copies each.

It’s tempting to see this as analogous to the widening gap between the rich and the poor on the social level; however that might be, it’s clear that the book industry is really two different industries, and this accounts in large part for its disfunctional quality. On the one hand there is an industry that is similar to Hollywood (and in fact is controled by the same conglomerates) and then there is a much larger yet more marginal industry that is more similar to YouTube.

“Alternative” publishers and authors — who really produce the bulk of all books published — need to free themselves from the mindset of traditional mainstream publishing. The Hollywoodization of publishing has created an arena in which they mostly can’t compete. Instead they need to turn their backs on the blockbuster mentality and embrace alternative marketing, new technologies, and original distribution avenues. The challenge has always been to put books together with the appropriate readers. Thanks to new social web applications such as Facebook we now know exactly what kinds of things many people are interested in — information that used to come only from expensive market research. Publishers need to find ways of using this information to market books more efficiently to audiences that will produce a good return within the economies of scale of nonblockbuster publishing.

The Extended Live Archives plug-in for WordPress that I mentioned in a previous post is not compatible with WP 2.3, because the WP file structure was changed to accommodate its new tags feature. Fortunately, there is a fix.

There are 10 kinds of people in the world: those who understand binary and those who don’t.

A week of landmarks and landmines.

I don’t think I’ve mentioned here the book launch that will be held tonight at 6:30 for our new anthology of Latin American literature. The venue is Chronicle Books, 680 Second Street. You can read about it here.

I’m in the beginning stages of designing a new book about Persian ceramics. It will be a small book (for an art book), at 9.5 x 10 inches the closest to square I have ever done. This is the proportion known as the “turned pentagram” because it is the shape of a rectangle drawn around the five corners of an equal-sided pentagram. I still have a bunch of work to do, but an essay spread will probably look something like this: 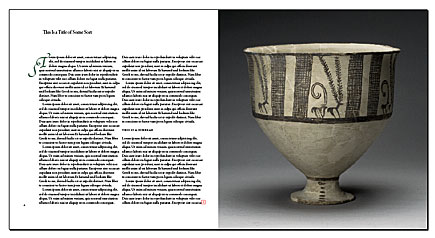 For entry pages I’m planning on putting the tombstone information at the bottom facing the large recto images. The chat retains the decorative initial (from the Poetica font set; the main text is a form of Garamond). Does this look okay?

Here are the underlying page guides. The magenta area is the main text block — a four column block, although I may only use two columns for text. 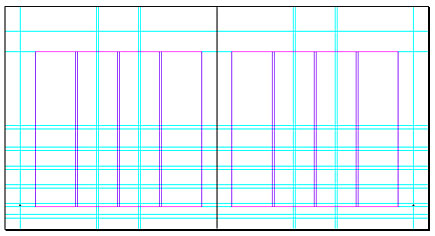 The cover would use the same page design elements. 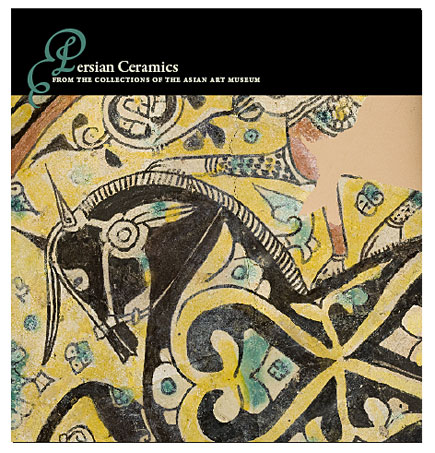 Here’s a closer view of the type treatment.

Again, this is all a little preliminary, but it reflects my plans at this stage. I am trying, of course, to match the design to the content. You may be able to see from the first couple of spreads the sort of proportions that are typical of Persian ceramics. If anyone has any suggestions I would be happy to hear them.